Different from the plant cell wall and bacterial cell wall, the yeast cell wall is mainly composed of “yeast cellulose”, similar to sandwich structure, the outer layer of mannan, inner layer of dextran, a layer of protein molecules in the middle, cell wall also contains a small number of lipids and chitin.

Yeast cell wall accounts for about 20%~30% of the dry weight of the whole cell, which plays an important role in maintaining cell morphology and intercellular recognition. According to the chemical group, mannan accounts for about 30% of the dry weight of yeast cell wall, β -glucan 30%, glycoprotein and chitin 20%, protein, lipids, inorganic salts and other components about 20%. The innermost structural polysaccharides of the β -glucan genus, linked to the protoplast membrane, constitute the main component of the yeast cell wall and function to support the external mannan. β -glucan is composed of β-1, 3-glucan and β-1, 6-glucan in a ratio of 85:15. β-1, 3-glucan is the backbone of β-1, 6-glucan, and β-1, 6-glucan is the branch chain. The reducing end of β-1, 6-glucan is connected to the non-reducing end of β-1, 3-glucan, and forms a three-dimensional network structure under the action of the hydrogen bond. Its network structure has strong elasticity and can be extended greatly under normal osmotic pressure. When the cell is under high osmotic pressure, the three-dimensional network structure can rapidly shrink, only accounting for about 40% of the original volume, when the osmotic pressure returned to normal, the three-dimensional network structure can be restored. 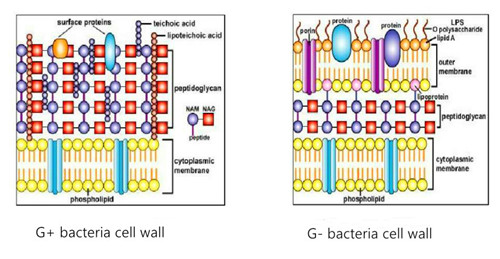 The main component of the bacterial cell wall is Peptidoglycan, also known as Mucopetide. The mechanical strength of cell wall depends on the presence of peptidoglycan. Synthesis of peptidoglycan is a prokaryotic ability. Peptidoglycan is a polysaccharide scaffold composed of two amino sugars, n-acetylglucosamine and n-acetylcytoacid, which are interlinked by β-1.4 glycosidic bond. Four peptide side chains are connected to n-acetyl intracystic acid molecules, which are connected by peptide Bridges or peptide chains to form a strong mechanical network structure. The peptidoglycan scaffolds of all bacterial cell walls are the same, and the composition of the tetrapeptide side chain and its connecting mode varies with the species.

The cell wall gives bacteria a fixed shape and toughness, controls the exchange of substances inside and outside the cell, and determines the antigenicity, virulence and sensitivity to phages of bacteria. Penicillin, for example, inhibits the network structure of peptidoglycans, preventing bacteria from forming intact cell walls and dying. The cell wall of bacteria is not permeable. In genetic engineering, the CaCl2 solution can be used to improve the permeability to facilitate the introduction of target genes.

The Function Of Yeast Cell Wall