You are here: Home1 / Blog2 / blog3 / Which Mushrooms Contain Ergothioneine?

L-ergothioneine(ERG) is a sulfur-containing (metabolite of histidine) derived amino acid. It is distributed in some tissues and organs of mammals, mainly in red blood cells (about 1-2 mmol.L) and semen of some animals. It was isolated in 1909 by Charles Tanret from ergot (Claviceps purpurea), the scleria of the fungi Ergot and microcephalic ergot. At present, it is found that it can be synthesized in some microorganisms such as fungi, Streptococcus and Mycobacterium, and can be absorbed and accumulated by plants and animals. Although no experimental studies have shown that animals themselves can synthesize ergothione, it is certain that there is a way to absorb and retain ergothione in animal cells. 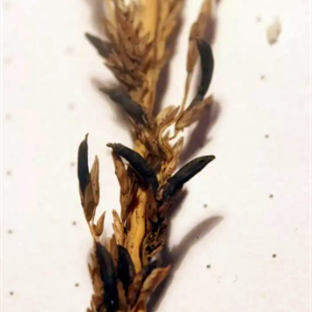 The highest concentrations of l-ergothioneine are found in mushrooms, you may be wondering which mushrooms contain ergothioneine. There are many mushrooms that contain the compound, this article will give you an overview of the different kinds and the amounts of the antioxidant in them.

Mushrooms containing ergothioneine include Pine mushrooms, oyster mushrooms, shiitake, King Bolete, porcini, chanterelle, and enokitake. The porcini, oyster, and maitake mushroom varieties have the highest amounts. Other varieties such as shiitake and black bean contain lower levels of ergothioneine. The compounds are also found in many foods, including kale, spinach, broccoli, and brussels sprouts. Researchers have discovered that ergothioneine levels in cultivated mushrooms are directly related to their antioxidant capacity. However, there is some overlap between the two. One study found that ergothioneine levels in cultivated mushrooms ranged from 60 mg/kg of dry weight, while another found that the amount was higher in paecilomyces tenuipes. The mushroom contains 13 milligrams of ergothioneine per 3 oz serving, that’s 40 times more than wheat germ! And shiitake mushrooms also have numerous chemical compounds that protect the body’s DNA, another compound, lentinan, helps repair the damage done to chromosomes by cancer treatments. Therefore, eating mushrooms rich in ergothioneine is a good way to get the essential nutrient.

Mushroom ergothioneine is related to glutathione (GSH), another important sulfur-containing antioxidant. Ergothione has been shown to be bioavailable when mushrooms are part of the diet. The Center for Plant and Mushroom Food Health, Department of Food Science, Pennsylvania State University, USA, conducted a study to determine and compare the levels of glutathione and ergothione in different mushroom species. GSH and ERG contents were found to vary widely among mushroom species, with glutathione content varying more than 20-fold (0.11-2.41mg/g dw), the first comprehensive analysis of glutathione levels in different mushrooms. These results indicate that glutathione is present in high amounts in most mushroom species. In the present study, the GSH content of mushrooms was as high as 7.8 mg/g DW, indicating that GSH rich mushrooms had higher GSH content than any other vegetable or fruit previously detected. Therefore, mushrooms are likely to be an important source of GSH in the diet, especially in areas with high mushroom intake.
Ergothione content also varied significantly (0.15-7.27 mg/g DW) and was highly correlated with glutathione level (r=0.62, P < 0.001). This suggests mushrooms with high glutathione content also tend to have higher ERG. The mechanism of this relationship is not clear, but it may reflect the biosynthetic pathways they link and the greater need of some strains to resist oxidation based on their rapid growth and high respiration rate. The concentrations of these two antioxidants were higher in the pilus than in the stem tissue. The third harvest of Agaricus bisporus contained higher levels of ergothione and glutathione compared to the first harvest of Agaricus bisporus, possibly in response to increased oxidative stress. 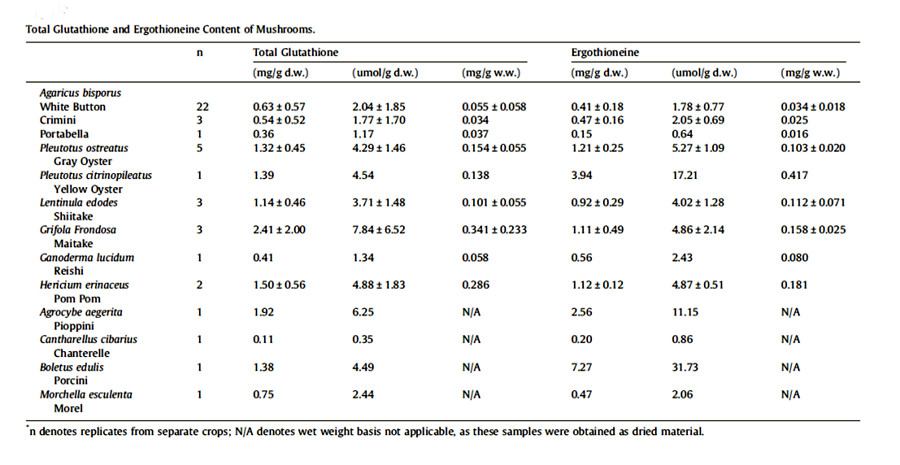 For most mushrooms, ERG levels were equal to or greater than GSH, with Auricularis auricularis and porcini being the most prominent, having four to seven times more ERG than GSH. Thus, unlike most organisms, these mushrooms are unique in that ergothione, not GSH, is its most abundant intracellular antioxidant. So mushrooms are clearly a uniquely rich source of antioxidants in the diet.

In addition to shiitake, oyster, and maitake mushrooms, ergothioneine is found in other foods, including red beans, black beans, and oat bran. Some mushrooms are high in these compounds, but others do not. It’s important to find out which mushrooms contain ergothioneine before you start eating them. If you’re unsure, look for a mushroom with high antioxidant content. You can also take supplements containing ergothioneine, as well.

Another source of ergothioneine is ergot fungi. This substance is an antioxidant and may protect your skin cells from oxidative stress. Oxidative stress and free radical damage are major contributors to premature aging, sagging skin, wrinkles, and other degenerative diseases. Ergothioneine is an amino acid that moves vitamin E into cells. It is especially important for cells with high oxidative stress.

In addition to being an important part of a healthy diet, mushrooms can also be used as supplements. Simply substituting half of your meat with mushrooms will reduce your total cholesterol intake by up to 50 percent. Ergothioneine has also been used in medicine, including for liver damage, cataracts, and Alzheimer’s disease. Applied directly to the skin, ergothioneine can help reduce wrinkles and reduce sun damage.

What Foods Contain Fisetin and How Fisetin Benefit For People?
Download Form
[contact-form-7 404 "Not Found"]
Scroll to top