Blog
You are here: Home1 / Blog2 / blog3 / What’s the difference between bitter and sweet apricot kernels? 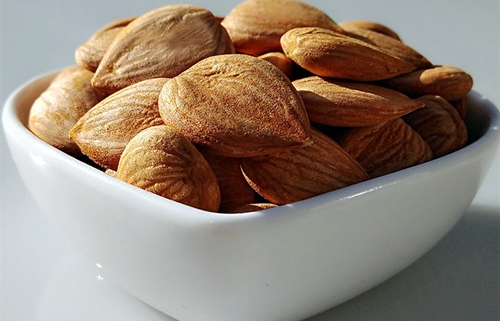 Dried apricot kernels are a popular snack nut that you can often find in health food stores or online. There are many types of almonds, the most common bitter and sweet almonds, which look similar and are both edible. While most apricot kernels are naturally sweet, some may contain high levels of amygdalin, a natural toxin. If eaten in large quantities, this compound can lead to cyanide poisoning. Affected consumers should avoid consuming these products. When you buy apricot kernels, always be sure to read the label and look for a warning label. So how do you tell the difference between bitter and sweet almonds?

The toxicity of bitter apricot kernels comes from the hydrocyanic acid released by the hydrolysis of amygdalin (cyanoside). This substance is capable of releasing cyanide after it is eaten. While this is harmless, excessive amounts can cause cyanide poisoning. It is a type of cyanide found in small amounts in many plants and foods, such as apples, cherries and apricots. It usually binds to sugar molecules and is present in the form of cyanoglycosides. Excessive consumption of bitter almonds may cause acute toxic symptoms such as dizziness, headache, palpitations, convulsions, indigestion, slow heart rate, loss of consciousness and coma. As a result, ANSES recommends that adults eat no more than three bitter almonds a day, and children no more than half an almond a day.

They look similar in appearance. The bitter apricot kernels(The left side in the fig.) are small and heart-shaped, about 1 cm in diameter. The kernels have dark yellow or reddish-brown skin and are thin with fine lines. 1-1.6cm long, 0.7-1.3cm wide, 0.5-0.7cm thick, slightly left-right asymmetry.

The sweet apricot kernels(The right side in the fig.) are heart-shaped and slightly larger than those of bitter almonds. The bottom is blunt and round. The skin of the kernel is pale yellow and thick with thicker lines. 1.6-2.1cm long, 1.2-1.6cm wide, 0.8cm thick, bilateral symmetry.

Apart from being a healthy food, apricot kernels also have other health benefits. They contain essential fatty acids, which help in fighting heart diseases, while also improving mental health. When ingesting a small number of bitter apricot kernels, the amygdalin can be decomposed by the enzyme itself or the enzyme of large intestine microorganism, producing trace hydrocyanic acid, which can inhibit the respiratory center to suppress cough and relieve asthma. Benzaldehyde is produced during the decomposition of amygdalin, and its metabolites have anti-inflammatory and analgesic effects, as well as potential benefits for preventing the rise of blood glucose and lipids after meals. It has been reported that the extract of bitter apricot kernels can inhibit cell mutation. However, if you eat too many of them, you will develop cyanide poisoning. Symptoms of cyanide poisoning include difficulty breathing, weakness, confusion, and even loss of consciousness. Those who have consumed large quantities of apricot kernels are likely to experience serious side effects.

As a healthy food, sweet apricot kernels can not only effectively control the content of cholesterol in the human body but also significantly reduce the risk of heart disease and a variety of chronic diseases. But we don’t recommend eating too much at once.

How to remove the bitter taste of bitter apricot kernels?

Bitter apricot kernels were common in ancient India and China, where they were used to make pastries, jams and drinks, and they had a lot of experience with how to remove the bitterness. Generally speaking, amygdalin breaks down easily in acidic, heated conditions, while hydrocyanic acid is soluble in water. The simplest method is to soak in warm water at 50-60 ℃ for five days, changing the water twice a day until the bitterness is removed. Or soak bitter apricot kernels with pH5~ 6 slightly acidic water, 3 days can eliminate the bitter taste.