Mulberry leaves are the fresh or dried leaves of the Mulberry tree (Morus albaL.) in the Moraceae family and were used to raise silkworms in ancient China. A recent study of mulberry leaf extract demonstrated a significant reduction in the increase in plasma glucose levels after sucrose ingestion. In addition, it also significantly suppressed the increase in total insulin levels in the blood after this same period. In addition, no adverse events were reported by any of the study participants. These findings suggest that mulberry leaf extract may benefit patients with diabetes by promoting healthier blood glucose levels. But what exactly does mulberry leaf extract do? Let’s begin with its chemical compositions and pharmacological activity. 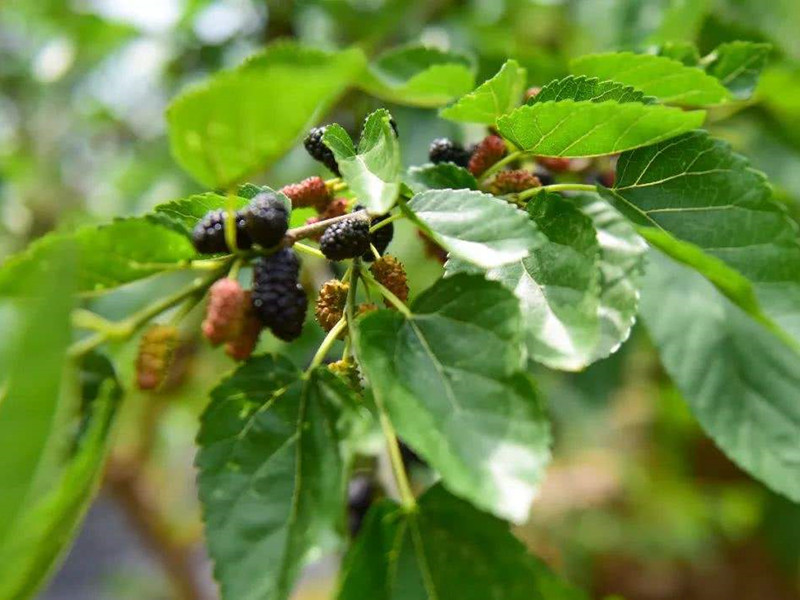 Mulberry leaves contain a lot of polyphenols. Because polyphenols have the chemical structure of hydroxyl oxygen, they can cut off the free radical chain reaction in the body with the help of polyphenol oxidase, and play the role of scavenging free radicals and eliminating their toxicity, thus showing a variety of biological activities such as anti-aging and enhancing immunity. The study found that mulberry leaf polyphenols are composed of p-hydroxycinnamic acid, caffeic acid, chlorogenic acid and its isomer, 7-hydroxycoumarin and other components.

Japanese scholar Asano et al. extracted seven alkaloids including deoxynojirimycin, N-methyl-DNJ, 2-oxygen -α -D-galactopyranosid-1-DNJ and Fagomine from mulberry leaves. DNJ Powder can inhibit the activity of α -glycosidase and reduce the peak of blood sugar in a short time after eating, thus reducing the absorption rate of sugar in the small intestine.

Plant sterols, also known as sterols, have a basic structure of cyclopentane perhydrophenanthrene, containing 3-hydroxyl, which not only exist in various vegetable oils, nuts and plant seeds, but also in other plant foods such as fruits and vegetables. The sterol content in mulberry leaves is 3 ~ 4 times higher than that in other plants, and it mainly contains β -sitosterol, β -D-glucoside, stigmasterol and mosquitoes. Phytosterols compete with cholesterol in the chylomicron, leading to the direct absorption of cholesterol into an unabsorbable form that is separated from the chylomicron and cannot penetrate the intestinal wall, thus inhibiting the absorption of cholesterol.

There are 18 kinds of amino acids in mulberry leaves, accounting for 10.10% of the total dry matter in mulberry leaves, among which the essential amino acid content of human body accounts for 44.85% of the total amino acid. These include glutamate, glycine, valine, alanine, semen, lysine and tyrosine, as well as leucine, isoleucine, cysteine, aspartic acid, phenylalanine, proline and gamma-aminobutyric acid. Glutamate is the highest content of amino acids, but also the precursor of the neurotransmitter γ -aminobutyric acid, which has the function of lowering blood pressure and protecting brain tissue.

Mulberry leaves contain vitamin A, vitamin B group, vitamin C and niacin and other vitamins.

The study found that mulberry leaf extract significantly reduced the levels of three key enzymes that are responsible for preventing T2DM. These enzymes include glutathione reductase, glutathione peroxidase, and superoxide dismutase. In addition to its anti-oxidant properties, mulberry leaf extract reduces the level of glucose in the blood and insulin levels, two of the most important factors in preventing diabetes.

A recent study found that mulberry leaf extract inhibits body weight gain induced by a high-fat diet. The final body weight of the animals fed with mulberry leaves was significantly lower than that of the controls. In addition, the volume of visceral adipose tissue and the overall body fat mass were reduced. The findings were also confirmed by microscopic analysis. Similarly, mulberry leaf extract inhibited the production of adipocytes and lipid droplets, which are responsible for fat storage.

Mulberry leaves contain phenolic compounds and vitamin C and other components can inhibit or remove free radicals, prevent cell damage due to oxidation, and then slow down aging. Vitamin B1 helps maintain the normal function of the heart and nervous system. Vitamin B2 helps maintain the normal function of the retina; Vitamin C can enhance the density of the small blood vessels, enhance the body’s resistance to infection. Folic acid can intervene in the synthesis of nucleic acid, has the effect of resisting all kinds of anemia symptoms and promoting growth, is beneficial to human health. By increasing the activity of antioxidant enzymes such as SOD, flavonoids can eliminate superoxide free radicals and hydroxyl free radicals and prevent protein from transforming into glycosylated end products, which can be used to relieve diabetes and its complications.

Flavonoids, DNJ, vitamins, Cu-Zn, SOD, GABA and other components contained in mulberry leaves can prevent cancer, enhance the immune capacity of the body, and prevent chromosome mutation. Flavonoids from the mulberry leaf can induce the differentiation of human promyeloid leukemia (HL-60) cells. These flavonoids can scour the free radicals of 1, 1-diphenyl-2-picryl-hydrazine and show inhibitory effect on the growth of human promyeloid leukemia cell lines.

In addition to mulberry leaf extract‘s ability to lower bad cholesterol, it also has a wide range of other benefits that are becoming increasingly recognized in the dietary supplement industry. Among these are the beneficial effects of mulberry on the digestive system, the immune system, and skin lightening. Additionally, there is also a good chance that some components of the plant also have anti-cancer effects. It’s not clear how, exactly, these benefits can be realized in humans, but mulberry leaf extract has already gained significant popularity in the market.

In recent years, with the development of a mulberry leaf from raw material processing to mulberry leaf extract supplement, its nutritional and medicinal value has been gradually explored, and it has become popular in the food and medical care fields. The Asia-Pacific region is the largest market for mulberry leaf extract, with China, India, and Japan accounting for the largest share of global production. The European market is also dominated by the dietary supplement sector, which is driven by the whitening effect of mulberry extracts.

Mulberry leaf powder can be used as feed instead of concentrate feed or protein feed. The protein content in mulberry leaves is high, which can obviously improve the color and flavor of chicken yolk and effectively reduce the ammonia emission in chicken manure when added to chicken feed in a certain proportion. Adding 25% ~ 30% to black goat feed or 10% ~ 15% to meat rabbit feed can enhance physique, accelerate growth, improve meat quality and reduce feeding costs at the same time.

Mulberry leaf tea is generally made of high-quality young mulberry leaves with good ecological environment, no pollution and no diseases and insect pests. It is refined by twisting, rolling, baking and other processes. The main purpose of this process is to get rid of the bitter taste and grass taste in mulberry leaves. Mulberry leaf tea has the health care effects of lowering blood sugar and blood fat, cholesterol, weight loss and beauty, etc. Besides, it is also suitable for the auxiliary treatment of people with abnormal glucose tolerance, mild diabetes and hyperlipidemia.