Dandelion(Taraxacum officinale) is a member of the family Asteraceae, native to Eurasia, North America and Asia. Their leaves, roots, and flowers are both for edible and medicinal purposes found in herbal teas and supplements. Dandelion has many medicinal benefits and is used in herbal medicine as a liver nourishing herb in India and China for centuries. Dandelion root extract has anti-inflammatory and antihyperglycemic, and anti-cancer properties, though more research is needed to confirm these benefits in humans, its antihyperglycemic and anti-inflammatory properties have sparked interest in both conventional medicine and alternative health care practitioners. Dandelion root extract is used in alternative medicine for a variety of ailments, including tonsillitis, bladder infections, arthritis pain, and constipation.

The Composition of Dandelion Extract

Flavonoids widely exist in the plant kingdom, and their main characteristics are that one intermediate trivalent carbon is connected with two benzene rings containing phenolic hydroxyl. They are compounds with more content in dandelion and have anti-oxidation, anti-aging and anti-tumor effects. Dandelion contains flavonoids including luteolin, quercetin, isorhamnetin and geranyl lignin.

Triterpenoids are terpenoids composed of 6 isoprene and 30 carbon atoms. Most triterpenoids in dandelion are pentacyclic triterpenoids, which can interfere with cell signal transduction and promote cell apoptosis to achieve anti-inflammatory and anti-tumor effects. It mainly includes Taraxasterol, pseudodandelion sterol, taraxerol and so on.

Polysaccharide compounds exist in animals, plants and microorganisms, and are one of the basic elements that constitute life and play their functions. Dandelion polysaccharides mainly include glucose, fructose, sucrose, inulin and so on. These sugars mainly exist in its roots, which have the functions of improving immunity, anti-cancer, regulating blood lipid and blood sugar and anti-aging.

Sterols are one of the important active substances in plants, which can change cholesterol metabolism and prevent cardiovascular diseases. The main sterol compounds contained in dandelion are campesterol, daucosterol and pollenosterol, etc.

Other compounds include coumarins, such as umbellifolactone and scopoletin; Phenolic acids such as p-hydroxyphenylacetic acid, p-hydroxybenzoic acid, etc.; Volatile components such as long chain saturated or unsaturated fat, stearic acid, etc. 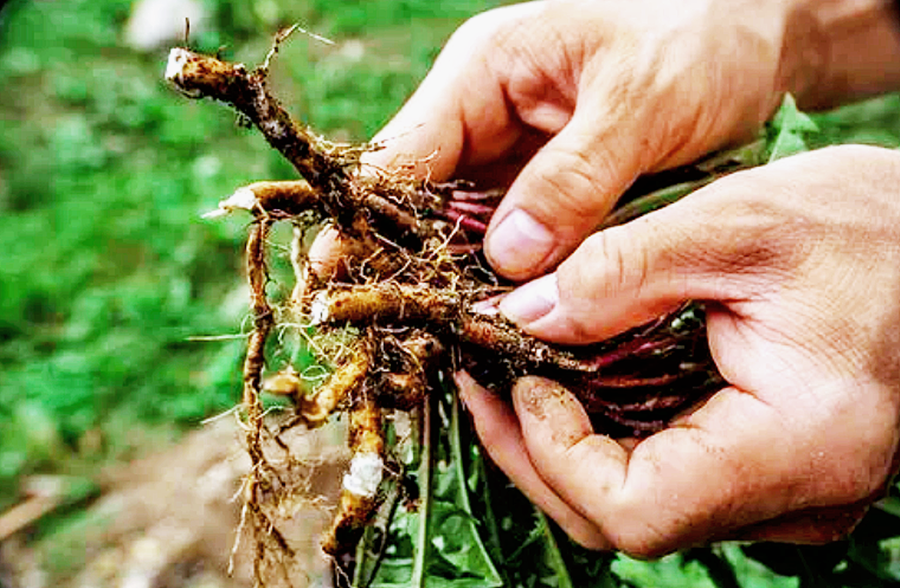 The Benefits Of Dandelion Extract

There are many potential dandelion extract benefits for your health. You may have heard about their ability to reduce cholesterol levels and triglycerides because the dandelion leaf is high in fiber. In laboratory experiments, Dandelion leaf extract reduced intracellular triglyceride and cholesterol concentrations by approximately 16.6%. In addition, Dandelion contains two kinds of compounds called chicoric acid and chlorogenic acid, which may have beneficial effects on insulin secretion and glucose absorption in the muscles. The two compounds may also limit the growth of cancerous cells and water retention. The benefits of the dandelion extract are also including:

Dandelion extract is a natural diuretic and may help reduce your body weight. The herb is safe to consume, and it is sometimes consumed raw. Dandelion tea is made from the roasted root and sometimes the whole flower. Dandelion tea has a long history in herbal medicine. The herb’s effects are similar to those of the weight-loss drug Orlistat, which inhibits pancreatic lipase. In a study conducted on mice, dandelion produced similar results to other drugs used to treat obesity. Dandelion chlorogenic acid, a compound with a diuretic effect, also inhibits fat-storing hormones, a factor that contributes to water weight retention. Additionally, dandelion is a diuretic, helping to reduce water weight and relieve symptoms of constipation and bloating.

Lupeol is another compound found in dandelion root extract. Its antioxidant properties help eliminate harmful tumor cells and prevent DNA strand breaks that promote cancer. Additionally, dandelion may also be helpful in cancer prevention and treatment. One study found that dandelion extract killed 95 percent of colon and skin cancer cells after two days. The pharmacological activity of dandelion root extract was investigated in an animal study in which dandelion extract significantly decreased the growth of colon cancer cells in rats.

Dandelion is a natural diuretic, which means it can help you lose water weight. Despite its popularity, the herb should not replace prescribed medication. Dandelion is often regarded as a weed, but the root of this plant is loaded with nutrients, including chlorophyll. It also acts as a natural diuretic, which can help to reduce water retention. A study published in the Journal of Alternative and Complementary Medicine in 2008 found that dandelion extract reduced water retention in healthy adults. It increased the frequency of urination in study participants.

The root of dandelion contains an array of nutrients that can help the body fight diabetes. It contains fatty acids, carbohydrates, carotenoids, minerals, choline vitamins, and mucilage. Up to 45% of the roots contain inulin, which has numerous beneficial effects, including obesity suppression. Dandelion leaf extract is also effective in fighting cardiovascular disease.

Research suggests that dandelion extract may regulate blood glucose levels by increasing insulin secretion. This effect is attributed to its ability to activate b-cells in the pancreas. These cells are key in the control of glucose levels. When these cells secrete insulin, they prevent hyperglycemia. It has also been found that dandelion may improve insulin sensitivity. Studies have found that it lowers blood sugar levels in people with type 2 diabetes. Although dandelion cannot be used in place of medicine, incorporating it into the diet may help reduce the dosage of diabetes medications.

The leaves and stems of dandelion are eaten raw, and the dandelion root is often dried and used as a tea or coffee substitute, or you can also buy dandelion supplements in the form of extract, tincture, or capsules. Dandelion is a weed with antimicrobial and antibacterial properties and can be used as a food supplement. Studies have also shown that it can increase milk, meat, and whey production when used as mammals and poultry feeding. Dandelion extract is also useful as a biofertilizer. It promotes plant growth and strengthens the plant’s resistance to biotic stress.

Dandelion extract is a new herbal supplement nowadays and there are few known side effects. However, dandelion extract can be dangerous if taken in excess. There are no scientific studies proving that dandelion is a cure-all, but it is worth trying out for its potential health benefits. Dandelion may also interact with certain medications, such as blood thinners. For those who are pregnant or breastfeeding or if you’re using it to treat chronic conditions, it’s best to consult your doctor.

This side effect is only mild and rarely causes serious health issues. If you’re already suffering from kidney disease or a kidney condition, you should talk to your doctor about any potential interactions with dandelion extract. Although this is not conclusive, it is still an interesting side effect to be aware of. Anyway, Dandelion Extract, but it is worth trying.