Deoxynojirimycin (1-DNJ) is a piperidine-like polyhydroxy alkaloid extracted from mulberry leaves. Its chemical name (2R,3R,4R,5S) -2-hydroxymethyl-piperidine-3,4,5-triol, with molecular formula C6H13NO4 and molecular weight 163.17. DNJ was first isolated and purified from Mulberry root bark by Japanese scholar Yoshiaki et al in 1976. In addition to Mulberry, 1-DNJ and its analogues were also found in the plants of Commelinaceae, hyacinth, and Psammophyllum, but their contents were lower than those of Mulberry. DNJ has a structure similar to α-1, 4-glucose and is a powerful α -glucosidase inhibitor, which has been found to have good hypoglycemic, hypidemic and antioxidant effects.

The Source of DNJ 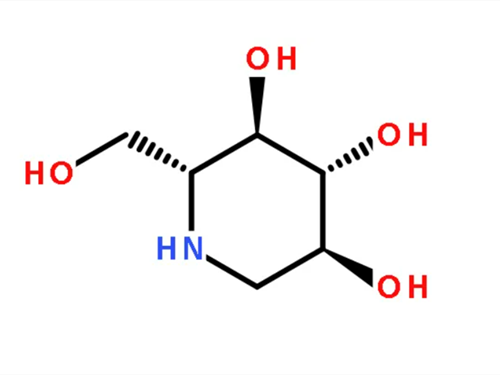 DNJ was extracted from plants and microorganisms. According to the literatures reported so far, the Mulberry leaf extract has the most abundant content of DNJ, and the DNJ isolated by microorganism mainly comes from Streptomyces and Bacillus. Almost all parts of mulberry were found to contain DNJ, but the content of DNJ varied with species, cultivation area, picking time and picking location. In addition, it was also isolated from plants such as Commelianceae, hyacinth, Radix Platycodontidae, and Pyrrhaceae. Sugiyama Makoto et al. first isolated DNJ producing Streptomyces SEN-158 and GC-148148(Strep Tomyces Lavendulae) from the soil. DNJ can also be produced by synthetic method. The following table shows the content of DNJ in different plants.

Extraction, separation and purification of DNJ 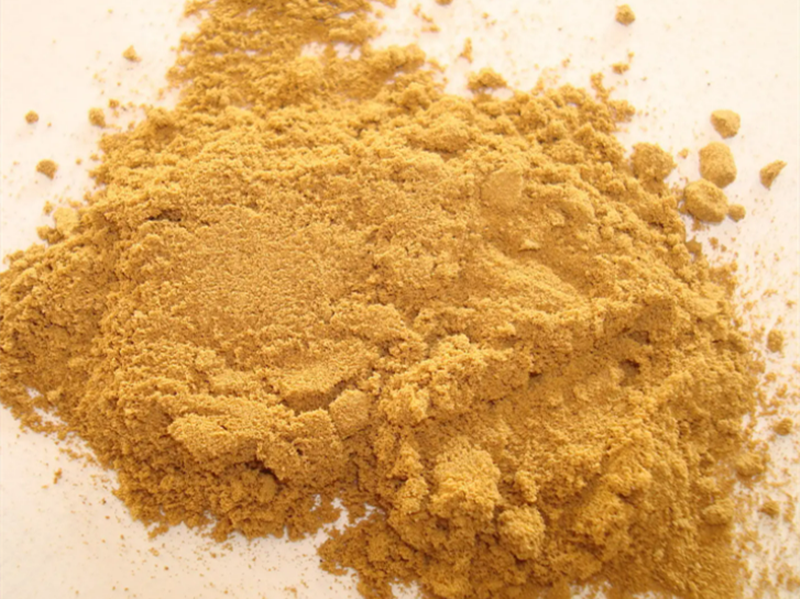 The extraction methods of DNJ from Mulberry mainly include distilled water extraction, hydrochloric acid extraction, deionized water decocting, ethanol extraction and microwave-assisted extraction. In the purification technology, most of the cation exchange resin method, reverse chromatography purification technology is also a little research. 1-DNJ exists in cells and is soluble in water. Cell structures such as cell wall need to be destroyed before extraction. Therefore, assisted methods such as microwave and ultrasound are conducive to the extraction of 1-DNJ. Specific methods include:

The effects of different factors on the extraction rate of DNJ were compared. The optimal extraction conditions were as follows: 65% ethanol as an extraction agent, solid-liquid ratio 1:8, ultrasonic enhanced cell crushing 20min(1800W), the extraction rate of 95.8%; Purified by cation exchange resin, the yield of DNJ was 124.54mg/100g, and the purity was more than 92.3%.

1-DNJ belongs to piperidine-type alkaloid, which does not contain chromophore such as benzene ring, double bond and carbonyl group, and has low light absorption in the UV wavelength range, so it cannot be detected by a UV detector. In addition, the structure of piperidine alkaloid contains multiple hydroxyl groups, and the molecular polarity is large, so it is difficult to be qualitative by photometric detection method. The instrument used in ultraviolet spectrophotometry is relatively simple, but it has the disadvantage of low sensitivity due to the interference of chromophore groups and other colored substances.

The Benefits of DNJ

DNJ has a structure similar to α-1, 4-glucose and can competitively inhibit the production of sugar in the metabolism of the body, so it has a hypoglycemic effect and can be used to treat diabetes and its complications, obesity and related dysfunction.

The hypoglycemic effect of DNJ was studied in alloxan induced diabetic mice, and the reaction of the mice was observed by oral supplementation of DNJ and polysaccharide. It was found that the levels of blood glucose, glycated hemoglobin, triglyceride, aspartate aminotransferase and alanine aminotransferase decreased significantly, body weight, plasma insulin level and high density lipoprotein increased significantly in diabetic mice fed with DNJ and polysaccharide mixture. The reverse transcription polymerase chain reaction showed that The expression of GCK type, PEPCK and G-6-Pase in the liver and pdX-1,insulin-1 and insulin-2 in the pancreas were positively and negatively regulated by DNJ and polysaccharide mixed feeding area. Regulation and liver glycogen metabolism and gluconeogenesis. Because DNJ does not have the action of hydroxyl free radicals and superoxide free radicals, it cannot repair the damaged islet β cells, so it can only reduce blood glucose to a certain level but cannot return to the original state with the help of polysaccharides.

DNJ could significantly inhibit the invasion, metastasis and cell adhesion of B16F10 cells, with inhibition rates of 50%, 35% and 60%, respectively. The inhibition activity of MMP-2 and MMP-9 was significantly inhibited at 50μg/mL and reached 20% at 50μg/mL. The inhibition rate of MMP-2 and MMP-9 mRNA expression was 60% and 28%, respectively. There was no significant effect on the expression of TIMP1 mRNA, but the expression of TIMP2 mRNA was increased by 31%. In addition, DNJ increased cell surface α -mannose levels by 49%, decreased oligosaccharide levels by 21%, and methylated levels by 30%. These results suggest that DNJ can be used as an adjuvant agent to inhibit the metastasis of cancer cells.

Papandreou found that low concentrations of DNJ could inhibit THE HIV capsid regulation of the glycoprotein membrane fusion of CXCR4 and thus inhibit HIV damage to the body. In addition, the inhibition of DNJ against Molony mouse leukemia virus (MoLV) showed that DNJ had a significant anti-retrovirus activity with IC50 of 1.2-2.5 μg/ mL, and the inhibition increased with the increase of DNJ dose. Steinmann E et al. found that HCV was rapidly killed after adding long alkyl chain DNJ into the culture medium of HCV infected cells, indicating that DNJ is a potential drug for the treatment of viral hepatitis C.

A large number of studies have shown that DNJ has a variety of active functions, including lowering blood glucose, inhibiting tumor metastasis and antiviral activity, making it a hotspot of current research. Mulberry is one of the species with a relatively high content of 1-DNJ, but it is limited by its extraction and purification production process. The discovery of genes regulating DNJ synthesis in Bacillus 3K85 strain also provides a basis for the large-scale synthesis of DNJ by microorganisms. At present, natural 1-DNJ powder has become a research hotspot.