What Are Bitter Apricot Kernels Good For?

You are here: Home1 / Blog2 / blog3 / What Are Bitter Apricot Kernels Good For?

Apricot kernels, also referred to as almonds, are a popular snack and raw material in nut butters and smoothies, their oil can be used to make creams, lotions, and other products. As a natural ingredient, the main active ingredients of bitter almond extract include alkaloids, flavonoids, polysaccharides, glycosides, organic acids, volatile oils and so on. Apart from food products, apricots are also used in the manufacture of oil, medicines, and cosmetics.

Apricot kernels are rich in dietary fiber and can help with digestion. The high fiber content may reduce the risk of constipation. Some research suggests that apricot kernels protect the immune system from certain infections. They may also help with inflammation and relieve pain related to arthritis. They also contain trace amounts of zinc. Zinc plays a crucial role in human eye health. It helps transport Vitamin A to the retina and produces melanin, because a lack of zinc can lead to poor vision and cloudy cataracts. Additionally, apricot seeds may slow the progression of age-related macular degeneration. The oil from apricot kernels is rich in essential fatty acids. These acids are necessary for the body to function properly. They play an important role in the brain and promote healthy growth and also support the reproductive system and regulate metabolism.

Nowadays, the Bitter Apricot Kernels have been used for medical uses more and more. This is because its rich content of Amygdalin, an active enzyme in apricot kernels, is a compound that’s found in more than one hundred edible plants. It is a derivative of vitamin B17, also known as laetrile, plants can release this cyanogenoside in a variety of ways. Amygdalin degrades to highly toxic hydrogen cyanide and is a potent poison. This cyanogenic glycoside is toxic in high doses. It is hazardous to humans because it can lead to life-threatening side effects, including nausea, vomiting, drooping of the upper eyelid, and liver damage. 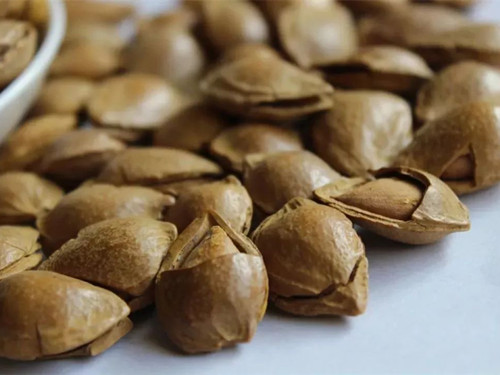 Bitter almonds were used in ancient China to relieve coughs and asthma. Now studies have shown that it relaxes bronchial smooth muscle and relieves spasms. The main mechanism is the slow decomposition of amygdalin in the body to produce trace hydrocyanic acid. This toxic compound can calm the respiratory center, make the respiratory movement tend to be gentle and achieve anticough and antiasthmatic effects. It is also possible that the low concentration of hydrocyanic acid can inhibit the oxidative metabolism of the carotid body and the aortic body, causing reflex respiration to deepen, so that sputum excretion.

Amygdalin is a naturally occurring cyanogenic glycoside, which proved a promising candidate for cancer treatment. It was first used as a cancer treatment in Russia in 1845 and was marketed in the United States in the 1920s. It has recently risen in popularity and is now available as an oral, IV, and injectable supplement.

Amygdalin inhibits tumor growth by reducing the level of inflammatory factors and immunosuppressive cells. It has also been shown to kill cancer cells by inhibiting the spread of these cells through the immune system. This phytochemical has shown cytotoxic effects against cancer cells. The chemical has been found to interfere with the expression of anti-apoptotic Bax and pro-apoptotic Bcl-2 proteins, which regulate cell death. It also inhibits the growth of cells by enhancing the deceleration of the cell cycle.

Amygdalin is also effective against NSCLC, a type of lung cancer. It works by inhibiting the AKT-mTOR signaling pathway. Amygdalin also inhibits the growth and metastasis of cancer cells. However, the effectiveness of this compound is questionable due to the fact that the US Food and Drug Administration (FDA) does not regulate vitamin or mineral supplements and has not approved the use of apricot kernel for any purpose. However, some people still use a concentrated extract or oil from apricot kernels to treat various ailments, including cancer.

Although apricot kernels are not toxic in moderation, they should not be consumed by children or pregnant women. Some studies suggest that they may have toxic effects in low doses. Despite their health benefits, bitter apricot kernels should be consumed in moderation. They can help improve digestion, lower cholesterol levels, increase energy levels, prevent cancer, and support the immune system. However, you should avoid consuming more than 30 to 500 apricot kernels per day.

How To Extract Amygdalin From Apricot Seeds?
Download Form
[contact-form-7 404 "Not Found"]
Scroll to top