The Medical Use of Artemisinin

You are here: Home1 / Blog2 / blog3 / The Medical Use of Artemisinin

In the last article, we introduced What’s Artemisinin, as we know, Artemisinin is a white crystal powder of sesquiterpene lactone with peroxide group extracted from the stem and leaf of Artemisia annul. Artemisinin and its semi-synthetic derivatives, such as dihydroartemisinin, artesunate and artemether, have been widely used in the treatment of malaria. Today here we will continue to talk about the medical uses of Artemisinin, if interested, please read on.

In 2004, the World Health Organization officially designated artemisinin-based combination drugs as the preferred treatment for malaria. According to the Lancet, an authoritative British medical journal, the cure rate of recurrent artemisinin drugs against falciparum malaria is 97%. The reducing agent is needed as an activator to break the peroxide bridge structure in artemisinin, causing the molecular electron recombination of artemisinin to generate free radicals, which leads to alkylation of plasmodium proteins, and ultimately leads to the death of plasmodium due to protein dysfunction. At present, it is believed that heme in plasmodium is the activator of artemisinin, while free inorganic iron ions have no activation effect on artemisinin.

Praziquantel is an early treatment for schistosomiasis, but it has no effect on developing schistosomiasis. Artemisinin-based compounds have been shown to be effective against all schistosoma species, including the larval stage because they are well tolerated by patients and have low toxicity while searching for alternatives to praziquantel. Artemether and artesunate showed higher activity to s. japonicum larvae, and females were more sensitive to S. japonicum larvae than males. The combined administration of ω-3 polyunsaturated fatty acids and artemether was found to have the best efficacy against SCHistosoma mansoni. It significantly reduced liver and spleen index, worm number, egg load, granuloma number and diameter, and the mechanism was related to the significant reduction of liver nitric oxide and serum interleukin-4 levels.

The combination of artesunate and praziquantel is more effective than praziquantel alone in the treatment of schistosoma mansoni infection. Both artesunate and dihydroartemisinin acetate showed good efficacy against both larvae and adults of S. mansoni and could be used as alternative drugs against S. mansoni.

Artemisinin drugs can inhibit proliferation and induce apoptosis of cancer cells. Compared with healthy cells, cancer cells have higher iron content and are more susceptible to artemisinin compounds, and artemisinin derivatives can overcome resistance to tumor necrosis factor-associated apoptosis-inducing ligands that induce apoptosis in the liver and cervical cancer cells. A large number of experimental studies have confirmed that artemisinin compounds have an inhibitory effect on liver cancer, lung cancer, ovarian cancer, cervical cancer, acute leukemia and other malignant tumors. In tumor cells, the decomposition of the peroxide group produces a large number of free radicals, which induces the oxidative stress response of cells, leading to apoptosis, autophagy, iron death and so on.

In nude mouse transplanted tumor model, dihydroartemisinin can reduce the number of M2-like tumor-associated macrophages, and inhibit the growth of head and neck tumors and the formation of tumor tissue capillaries, thereby inhibiting the development and metastasis of head and neck squamous cell carcinoma. Dihydroartemisinin can also induce iron death of tumor cells, induce autophagy of tumor cells, and block tumor cell cycle. The mechanisms of action are diversified, and drug resistance is not easy to occur. However, there are few clinical studies on dihydroartemisinin and chemotherapy drugs, and further studies are needed.

Artemisinin drugs have inhibitory effects on many common clinical pathogens such as Escherichia coli, Staphylococcus aureus, Helicobacter pylori and Mycobacterium tuberculosis, and most of the studies were in vitro. Artesunate significantly increased the sensitivity of carbapenem-resistant Klebsiella pneumoniae to ceftriaxone sodium, ceftazidime, ciprofloxacin and amicacin. The study found that the combination of dihydroartemisinin and cefuroxime was resistant to E. coli, and the curve showed that their inhibition against E. coli was significantly stronger than their use alone. 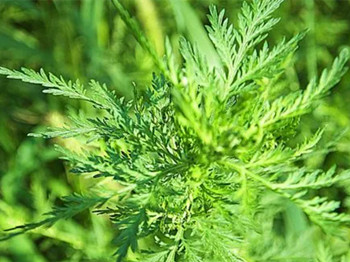 A large number of studies have shown that artemisinin-based drugs have antiviral effects on a variety of viruses, such as influenza A H1N1, Novel Coronavirus, cytomegalovirus, herpes simplex virus and hepatitis B virus, but the antiviral mechanism is still unclear.

Artemisinin has a potential effect on systemic lupus erythematosus in clinical and animal studies. Lupus erythematosus is an allergic reaction to epstein-Barr virus excreta: viral excreta includes dermal toxins (so skin problems are often associated with lupus), neurotoxins, byproducts, and viral dead bodies. Inflammation is the result of the body’s oversensitivity to epstein-Barr virus excreta, which also raises homocysteine levels, causing false positives in genetic mutation tests. As a result, mutation testing will return to normal when the virus is suppressed. Artemisinin, as a broad-spectrum antiviral drug, is effective in SLE.

Side Effects of Artemisinin

A large number of clinical studies have shown that artemisinin and its derivatives are safe in the treatment of malaria, with few serious adverse reactions, including dizziness, headache, fever, nausea, diarrhea and vomiting. It has been reported that oral compound dihydroartemisinin tablets can prevent malaria well. Dizziness, nausea, anorexia and other symptoms were occasionally observed after taking the tablets, and no serious adverse reactions were observed. It can be used as an ideal chemical drug to prevent malaria. Artemisinin-based combination antimalarial therapies remain highly effective against uncomplicated falciparum malaria, and concomitant disease may affect artemisinin susceptibility to adverse drug reactions, with patients with complications being three times more likely to have adverse drug reactions. In addition, patient age, body mass, and height also appeared to be associated risk factors for adverse events.

Studies have found embryonic death and teratogenic effects from artemisinin-based drugs, but they have not been proven in humans, so their use in the first three months of pregnancy is not recommended. In the current clinical studies, artemisinin drugs have not been reported to seriously affect liver and kidney functions and blood biochemical indexes, and the toxicity of artemisinin is caused by long-term concentration, rather than short-term peak concentration. In conclusion, artemisinins are safe to take, but adverse reactions should not be ignored, especially if long-term use is required, please consult your clinician immediately if there are any adverse reactions.