You are here: Home1 / Blog2 / blog3 / The Difference Between Cordyceps Sinensis, Cordyceps Militars and Cordyceps...

The genus Cordyceps consists of about 600 species worldwide, most of which are endoparasitoids, meaning they parasitize other fungi, insects, and arthropods. The two species of cordyceps that are readily available and commonly used for medical are cordyceps sinensis vs cordyceps militaris. The two species are closely and have different characteristics. In addition to being closely related, they can be very useful in combating a variety of diseases. The chemical makeup of the two varieties differs. The wild Cordyceps Sinensis has adenosine, while the Cordyceps militaris has cordycepin, which is an amino acid found in the mushrooms. In addition, the two have different properties and benefits. For instance, the former is used to treat anemia, while the latter has anti-inflammatory properties.

As shown in the picture above, This mushroom has many names, including winter worm, summer grass, and caterpillar fungus. Cordyceps Sinensis grows in and around the Tibetan Plateau. It is the mycelium that enters the larva of the Hepialusidiae and consumes its body, growing out of the ground in the form of grass the following summer.

The Cordyceps militaris species is a very common parasite ithe Cordyceps famil, they are found in the wild, and are a common food source for insects. Cordyceps militaris is a combination of two parts, the daughter (i.e. the grass part) and the sclerotia (i.e. the body part of the insect). It parasitises the cocoons and pupae of lepidopteran larvae, mostly in the litter leaf layer of forest. Now it can also be grown in a lab or a variety of media, including silkworm pupae and rice. 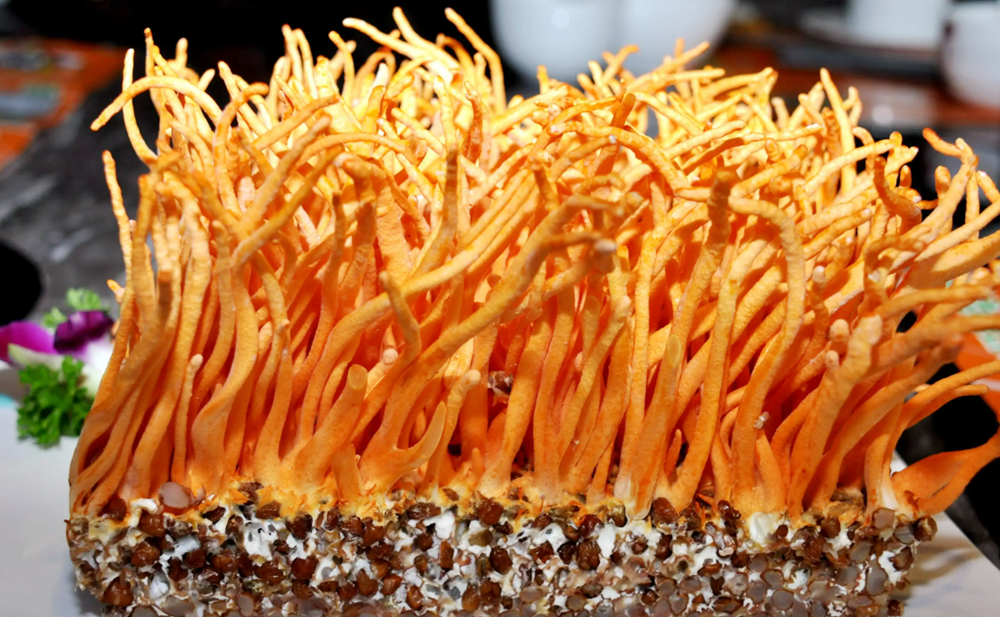 The way they grow
One way to differentiate between the two is to look at their growth habits. Cordyceps militaris prefers to grow on dead or decaying tree material while Cordyceps sinensis grows on insects

Both plants exhibit anti-inflammatory and antioxidant effects. In studies of mice, Cordyceps militaris and sinensis have been shown to have anti-lipid peroxidation potential. These findings indicate that both of these plants can significantly reduce LDL and total cholesterol. Their anti-lipidemic activity is also related to a reduction in triglyceride levels.

Researchers attribute these positive effects of cordyceps to its high adenosine content. Cordyceps militaris contains 5-6 times content of adenosine than that of Cordyceps sinensis. It is believed to reduce “bad” LDL cholesterol. This lipid can clog the arteries, increasing the risk of heart disease. In addition, it helps lower triglycerides, which are linked to an increased risk for heart disease.

Cordycepin Content
This study shows that the cordycepin content of stiff worms is similar to that of the natural herb. Cordyceps militaris contains higher amounts of total soluble protein and lower amounts of mannitol than Cordyceps sinensis. The main difference between the two was the amount of mannitol. Furthermore, light stress also promoted the production of cordycepin. These results are useful for the further study of the metabolites in fungi.

Both Cordyceps militaris and cordyceps sinensis have beneficial effects on the human body. Studies on the beneficial effects of cordyceps extract on the cardiovascular system have shown that it reduces blood lipid levels and improves antioxidant activity. It has also been shown to inhibit the synthesis of MDA, a pro-inflammatory cytokine. In addition, cordyceps is a vasodilator and reduces cholesterol levels, it can prevent and treat various inflammation-related disorders and improve the functions of cell-mediated immunity. The positive effects of cordyceps are also thought to extend to the respiratory system. People suffering from moderate to severe asthma were found to experience improved quality of life when taking the supplement.

Both Cordyceps sinensis and Cordyceps militaris compound reduces physical fatigue induced by forced swimming. Traditionally, both cordyceps is used to treat respiratory problems and to promote respiratory health. This herb also contains anti-inflammatory and antioxidant properties. It may even be effective against solid tumors. The active compounds found in cordyceps have been studied in isolation and in laboratory settings. This will provide scientists with a clearer understanding of the medicinal properties of the mushroom.

What is Horse Chestnut Extract Used For?
Download Form
[contact-form-7 404 "Not Found"]
Scroll to top