Mimosa pudica, also called sensitive plant, humble plant, touch me not, shame plant, is a prostrate or semi-erect subshrub plant native to Asia and the Pacific Islands, and in the pea family (Fabaceae). As its name implies, the mimosa is a very interesting plant, and its leaves will fold up when you gently touch them. Many people like this shy plant and keep it at home as an ornamental

A team of researchers led by Takaye Tsuchiya of Sophia University in Japan has solved the mystery of the closed motion of the mimosa plant: cells of the plant are supported by tiny net-like proteins called actin. When closing motion occurs, the phosphoric acid of kinetoprotein is shed, and as long as the mimosa plant does not absorb the phosphoric acid shedding compound, it does not change when touched. Tsuchiya points out that when the kinetoprotein bundles are spread apart, the cells are destroyed, resulting in water escaping and a closed motion. Kinetoprotein is commonly found in muscle fibers of animals and is associated with muscle stretching and contraction, also found in mimosas pudica. 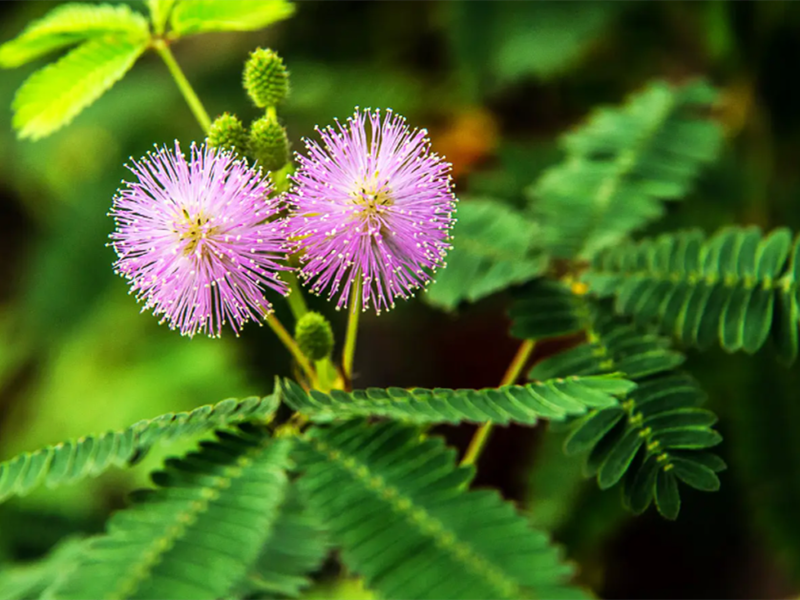 Mimosa is slightly toxic and contains a substance called mimosaine that can cause hair to turn yellow or even fall out. Mimosa is harmless during the day but releases toxins at night because it can’t photosynthesize. Mimosas need strong light, indoor light can not meet its growth needs. Therefore, we suggest that it is best to keep mimosa outdoors in order to avoid harm to the body.

In livestock, the ingestion of mimosas often causes disease. The most common is the poisoning caused by cattle eating mimosa without thorns, manifested as depressed spirit, grinding teeth, panting, dyspnea, and neurological symptoms, edema, and generally more in winter. In addition, due to the content of mimosa, camels, horses and other edible mimosa will appear molting phenomenon.

The medical benefits of mimosa pudica

There are a few different medicinal uses for mimosa pudica. The whole herb of Mimosa pudica is used to treat a variety of diseases. In Ayurveda, the roots are astringents and anti-inflammatory agents, and the seeds are used as an emetic. In traditional Chinese medicine, the entire plant is a powerful remedy for rheumatoid arthritis. This herb is also used to treat itch-related diseases.
In addition, the plants’ leaves are useful for relieving toothaches. For example, it is beneficial for treating bleeding piles. Crushed leaves of the plant can be applied to the affected area as a poultice. The anti-inflammatory and wound-healing properties of the leaves are well-known, and there are also a number of other uses for mimosa pudica. For instance, ethanolic extract from the leaves of this plant reduced gastric acid secretion and ulcer index, and the amount of acid in the stomach was decreased.
This perennial herb is an important herbal medicine for ulcers. A study showed that an ethanol extract of the plant significantly reduced the formation of ulcers in rats, Mimosa extract reduced the formation of ulcers by 40%.  In traditional medicine, the plant’s leaves were used to treat wounds and to heal them. Traditionally, juice of the leaves was made and applied to the wound. An extract of two to eight percent was found to have significant wound healing activity.

In Ayurvedic medicine, Mimosa is used for its roots and seeds.   The root of Mimosa pudica is used for a number of purposes, including as an anti-inflammatory. A decoction of the root contains high levels of phenols, which are important compounds in healing wounds. Another study showed that an ethanol extract of the root effectively halted diarrhea in albino rats. Water extract from the dried root was highly effective in repressive snake venom. The root of Mimosa pudica is a versatile herb that is used to treat a variety of conditions. Its pharmacological activities of seeds include astringents, analgesics, and analgesics, which are often added to herbal tea.

One of the most interesting things about Mimosa pudica is its medicinal uses in various cultures. While it is useful for the treatment of rheumatic pain, it is also used in other countries. If you are pregnant, be sure to consult your doctor before taking the mimosa pudica extract products.