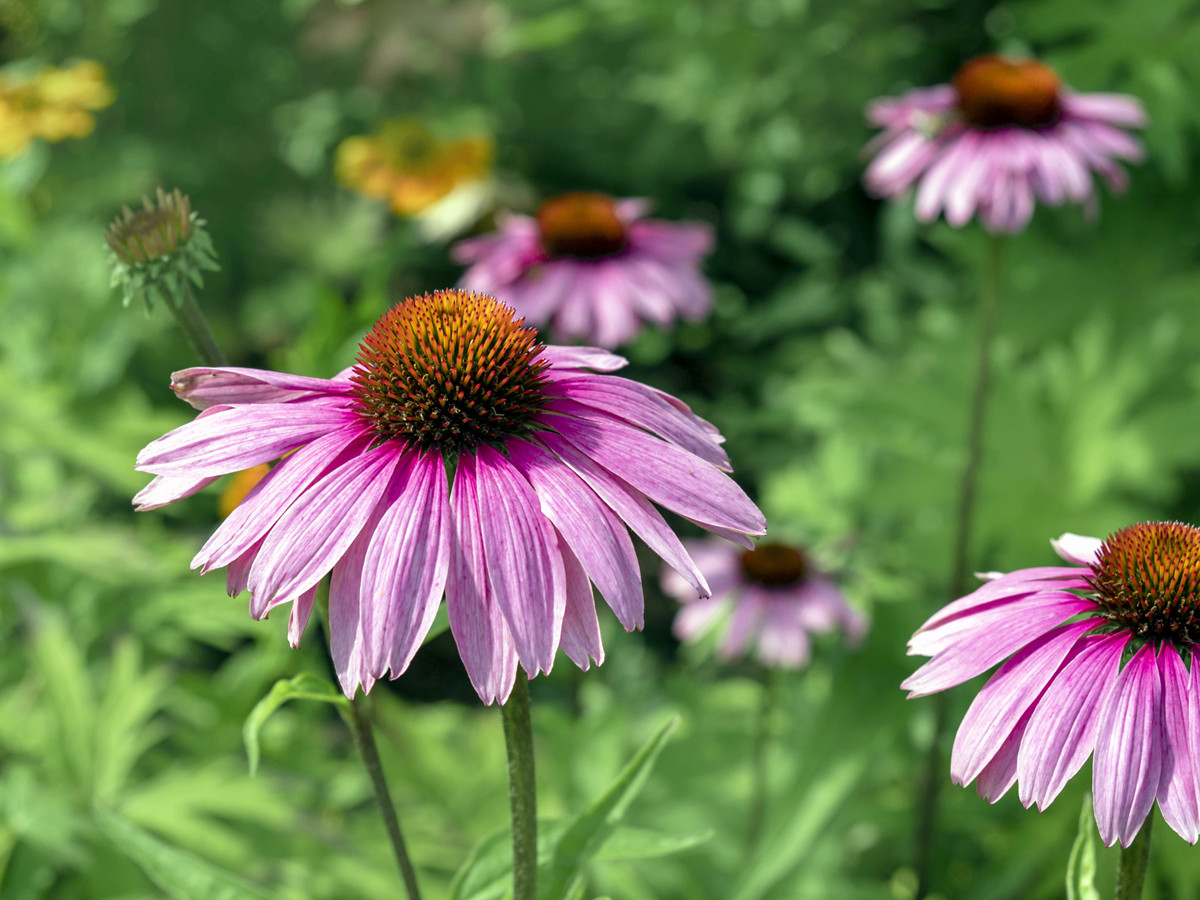 Echinacea is a perennial herb that belongs to the daisy family. These flowering plants grow in prairies, wooded areas, and open fields. The common name of Echinacea is purple coneflower. The flower is magenta to hot pink, with large, bristles on its petals. It is commonly referred to as purple coneflower and got its name because of its purple flowers, actually, it comes in a variety of colors, including white, purple, pink, and red. This plant has many medicinal benefits due to its good anti-inflammatory and immunomodulatory properties that can help your body fight bacteria and viruses. For folk people in north American Indians, it has been used for centuries for its healing abilities. Nowadays, Echinacea herb is available in capsule and tablet form, and used as a dietary supplement and in cold remedies and can help fight off inflammation and a number of infections.

The immunomodulatory activity of echinacea herb extract has been studied for quite some time. Many previous papers have described the medicinal properties of the Echinacea herb. In some studies, the plant was used to treat the common cold and researchers evaluated the effectiveness of the preparation on the immune system and the lymphocyte subpopulations.
The plant contains complex chemical composition, among them the two main components: volatile oils, which aid in treating flu-like symptoms, and polysaccharides, which improve the immune system. Both parts are included in most Echinacea capsules. Echinacea preparations are commonly taken to treat and prevent upper respiratory infections. Other components like Alkamides, caffeic acid derivatives, glycoproteins, and polysaccharides are all thought to be involved in the herb’s immunomodulatory and anti-inflammatory properties. Alkamides are known to be potent agents for immune system modulation and stimulation.

Reduce inflammation
The plant also has properties that may help reduce inflammation and help reduce the symptoms of a wide range of conditions, which is the body’s natural way of defending itself. Echinacea herb remedy is used to treat various ailments including anxiety, low white blood cell counts, rheumatoid arthritis, migraines, acid indigestion, and herpes simplex. Taking echinacea can help shorten the duration of a cold or flu, and it is best to start using it as soon as you feel common cold symptoms like sniffles appear. It can also be used to treat urinary tract infections and yeast infections.

Natural antibiotic
The Echinacea herb has been used to treat various infections and wounds for centuries in North America. Its medicinal value predates the European era, and Native American tribes used it to treat a variety of wounds and infectious diseases. A standardized Echinacea herb extract has been found to have potent antiviral activity. This herb’s roots and aerial parts contain numerous antiviral compounds, including caffeic acid. Antiviral activity was also found in the polysaccharide fraction, although caffeic acid had only weak to moderate antiviral activity. Aside from killing bacteria and viruses, Echinacea can also inhibit fungal and parasitic infections.

Adaptogen for mental health
Echinacea herb is a frequently utilized adaptogen for reducing anxiety, but the effects are small. The plant contains alkamides, rosmarinic acid, and caffeic acid, which may help reduce anxiety. Several studies have indicated that echinacea herb extract significantly reduced anxiety in mice and humans. In one study, participants who took less than 40 mg a day did not show any reduction in anxiety. Interestingly, the extract was found to increase oxygen intake during exercise tests in healthy men. That finding might indicate that it may be beneficial for people suffering from anxiety. However, further research is needed to confirm this.

Echinacea herb is available over the counter in many forms, including tea and pills. It is also available in liquid extracts and dried herbs. The herb is widely used for treating colds, flu, and other ailments. It is also sold in over-the-counter medications. However, it is essential to check with your health care provider before taking echinacea.