Amygdalin (also called Laetrile) is an extract derived from apricot pits and other plants such as apricots, peaches, and cherries. Plants can produce this cyanogenic glycosides, a type of plant toxin that causes headache, dizziness, and confusion. They are found in the vacuoles of plant cells and, when ingested, cause the production of hydrogen cyanide. They are thought to be derived from six amino acids and play an important role in plant defense systems and insect interactions. Although the effects of cyanide poisoning are temporary, they can be fatal for humans. The amount of amygdalin in a fruit depends on its variety and growing conditions. Here we will introduce the medical uses of amygdalin. 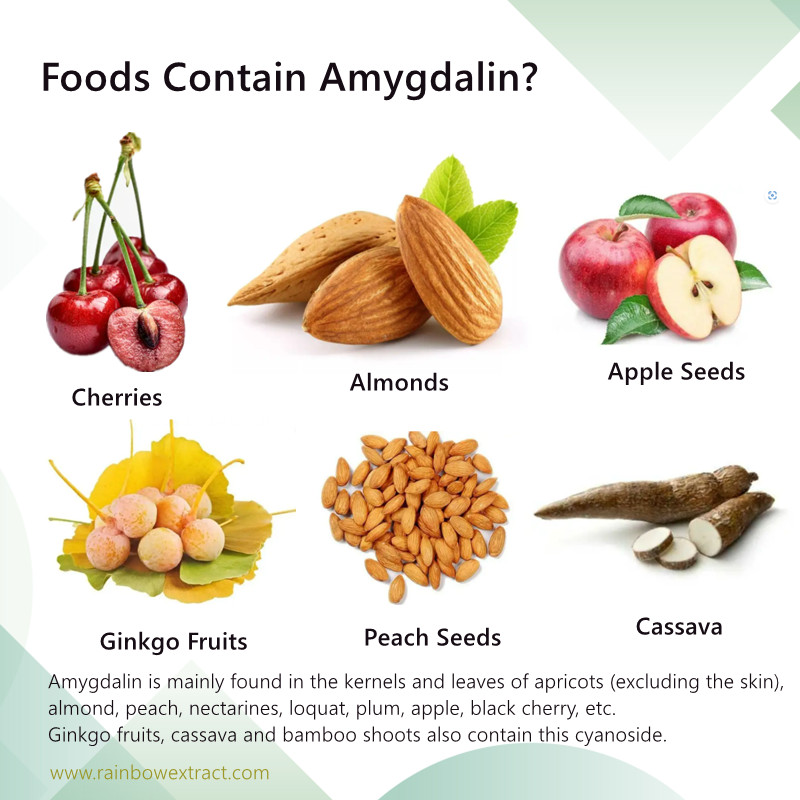 Liver fibrosis: A rat model of bleomycin pulmonary fibrosis was established by tracheal exposure, and 15 mg/kg amygdaloside was intraperitoneally injected to investigate the effect of bleomycin on the expression of type I and III collagen in bleomycin rats. On the 7th, 14th and 28th day of modeling, the area percentage of type III collagen of rats in amygdalin group was lower than that in bleomycin group, and the area percentage of type I collagen in lung tissue of rats in amygdalin group was decreased on the 28th day. These results indicated that amygdalin extracts could inhibit the formation of collagen type I and III, thus effectively slowing down the progression of pulmonary fibrosis in experimental rats, suggesting that this drug may be used in the prevention and treatment of human pulmonary fibrosis.

The renal interstitial fibrosis model of rats was established by unilateral ureteral obstruction. Amygdalin group was given 3 and 5 mg /d by gavage. The renal pathological damage of rats in each group was observed at 7, 14, and 21 days after operation. The results showed that the degree of renal fibrosis in the amygdalin group was significantly lower than that in the unilateral ureteral obstruction group at 21 days, which was reduced by 35% in the 3 mg /d group and 28% in the 5 mg /d group. The results showed that amygdalin could significantly reduce the degree of renal pathological damage and delay the progress of renal interstitial fibrosis, which further proved that amygdalin had anti-fibrosis effect.

Immune regulation: A rat model of chronic immune atrophic gastritis was established by subcutaneous injection of Freund complete adjuvant antigen. Adjuvant arthritis was induced by intradermal injection of Freund complete adjuvant. Carbon clearance index (K) and phagocytosis index (A) of mice were measured by carbon clearance experiment, and the effects of amygdalin on adjuvant inflammation and carbon clearance of mice were observed, so as to reveal its immunomodulatory effect. The results showed that amygdaloside 20 mg/kg by gavage for 6 weeks had the best effect on chronic immune atrophic gastritis in rats. The total acidity of gastric juice decreased and pepsin activity increased in each dose group. When the concentration of 10 and 20 mg /kg for 1 week, it can significantly inhibit the degree of foot swelling after inflammation. The clearance index and phagocytosis index were significantly increased when the concentration was 40 mg /kg for one week.

A recent study suggests that laetrile may inhibit tumor growth in mice. Bladder cancer cells (UMUC-3, RT112, TCCSUP) were treated with 1.25 ~ 10g/L amygdalin three times a week. After 2 weeks, it was found that amygdalin inhibited the growth and reproduction of tumor cells in a dose-dependent manner, and the effect was best at 10g/L. The attachment and migration ability of UMUC-3 and RT112 were significantly decreased under the treatment of 10 g /L amygdalin, but the migration ability of TCCSUP was increased, suggesting that amygdalin could regulate integrin β1 or β4 to affect the attachment and migration of bladder cancer cells, and the effect was related to cell type. However, this study has yet to be verified.

Some studies show that apricot kernel extracts can suppress the growth of colon cancer cell lines.It proved Amygdalin suppresses the development of cancer in HT-29 colon cancer cells. However, further research is needed before they can be considered as dietary anti-cancer therapies.

Cough reliving: Bronchial smooth muscle cells (BSMCS) were statically obtained by enzymatic digestion. BSMCS were subcultured in DMIM-F12 medium containing 10% fetal bovine serum and treated with different concentrations of amygdaloside. After 24 h, the cells began to be inhibited in a concentration dependent manner in the range of 0.022-0.704 g /L. The inhibition rate was up to 50% when the concentration was 0.704 mmol/L.

Prevention of bronchopulmonary dysplasia: To establish a primary cultured AECII hyperoxia cell model in preterm mice, and to investigate the effect of amygdaloside on the proliferation and surfactant protein (SP) mRNA expression of alveolar type II AECII cells in preterm mice exposed to hyperoxia. The results showed that amygdalin promoted the proliferation of preterm mice AECⅱ cells in a dose-dependent manner at the concentration of 50-200 mol/L, and the effect was strongest at the concentration of 200 mol/L, but inhibited at the concentration of 400 mol/L. It is suggested that amygdalin in an appropriate dosage form may be an effective drug for the prevention and treatment of bronchopulmonary dysplasia.

Anti-inflammatory Effect: Mice BV2 glial cells were treated with amygdaloside at concentrations of 1, 10, 100 and 1000 mg /L. After 24 h, the effects of amygdaloside on lipopolysaccharide LPS induced inflammatory response were observed. The results showed that amygdaloside could significantly inhibit cell growth at concentrations of 1g /L and showed significant cytotoxic effects. It is speculated that the anti-inflammatory mechanism is related to the down-regulation of mRNA expression of cyclooxygenase-1, cyclooxygenase-2 and inducible carbon monoxide synthetase, and then affects the synthesis of prostaglandin E2 and the production of nitric oxide.

Delay disc degeneration: Cartilage endplates were isolated from the intervertebral disc of 1-month-old SD rats and cultured. The antagonistic effects of amygdalin on IL-1β-induced apoptosis of rat intervertebral disc cartilage endplate cells were observed at concentrations of 10-2, 10-3, 10-4, and 10-5mol/L. The results showed that 10-4mol/L group had the most obvious antagonistic effect. It is speculated that this effect may be related to the regulation of apoptosis related proteins such as Bax and Bcl-2.