How The Dong Quai(Female ginseng) Benefits For Skin?

You are here: Home1 / Blog2 / blog3 / How The Dong Quai(Female ginseng) Benefits For Skin?

Dong Quai, also known as female ginseng, is the root of Angelica sinensis(Oliv.) Diels in the umbelliferae family. It is rich in volatile oil, organic acids, polysaccharides and other active ingredients. Ferulic acid, the active ingredient of its root extract, is commonly used as cosmetic efficacy raw material. Ferulic acid is an internationally recognized natural antioxidant and highly recognized anti-cancer substance in recent years. This article will introduce the specific application of angelica extract and  how its active ingredients worked in cosmetics? 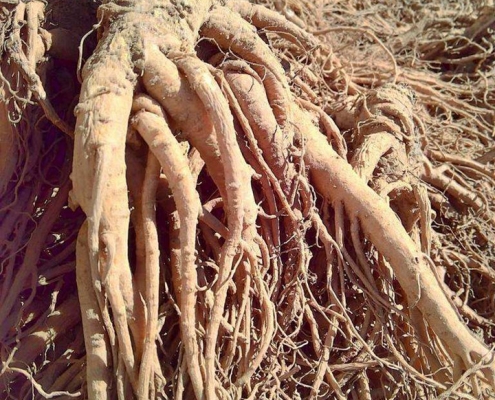 Human color of skin basically depends on the melanin in the skin, when melanin quantity grows too fast or distribution is uneven, can cause local skin to black reach pigment deposition, cause a variety of skin diseases such as chloasma, freckle, senile spot, and the number that tyrosine enzyme activity is deciding melanin forms. The water extract, alcohol extract, polysaccharide and ferulic acid of Angelica can inhibit the synthesis of melanin by inhibiting the activity of tyrosinase and can be used to whiten or treat chloasma. In recent years, angelica essential oil as a new tyrosinase inhibitor has shown a good application prospect in the field of whitening.

Healthy skin cuticle moisture content should be maintained at 10% to 20% of the mass fraction, when the water content is less than 10% of the mass fraction of the skin will be dry, rough, and even chapped. Angelica has been reported to have a good moisturizing effect due to its polysaccharide content. At present, it has been found that a large number of plant polysaccharides have the function of moisturizing and hydrating, because the polar groups contained in polysaccharides can form hydrogen bonds with water molecules to combine a large amount of water, and also form rich extracellular colloidal matrix with fibrin in the cuticle to provide moisture for the skin. In addition, polysaccharides have good film formation, which can build an artificial moisturizing barrier for the skin and reduce the evaporation of water on the skin surface. The active ingredients and its moisturizing mechanism of Angelica sinensis still need further study and confirmation. 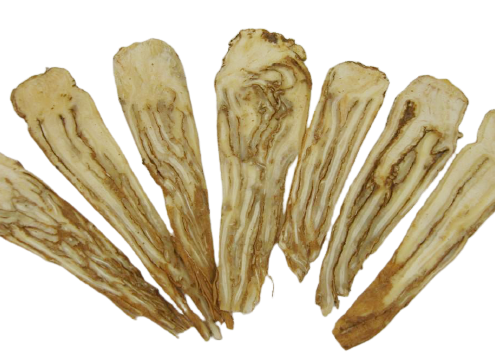 Skin aging is the aging process, the appearance of the most easily observed changes in performance for the skin flabby, decreased elasticity, wrinkly, luster and delicate degree, they are made of free radicals, telomerase, genetic, mitochondria injuries such as endogenous factors and exogenous factors such as aging, environmental pollution the result of joint action.

Angelica essential oil can effectively increase the secretion of type ⅰ collagen (Col- ⅰ) in human dermal fibroblast (HDF-α). Dong Quai extract/alcohol extract can decrease the contents of LF, MDA, type ⅲ collagen, apoptosis rate and expression of Bax protein, increase the contents of type ⅰ collagen and HYP, improve cell proliferation ability and activities of SOD and GSH-Px, and have the ability of scavenging DPPH free radical and chelating ferrous ion. These results suggest that angelica water extract can promote the proliferation of skin fibroblasts, improve antioxidant capacity and inhibit the apoptosis of skin cells to play an anti-aging effect. The results showed that angelica alcohol extract could reduce the expression of MMP-1 and MMP-3, and resist UVB photoaging by restoring the synthesis of type I procollagen and reducing the level of pro-inflammatory cytokine IL-6. Angelica polysaccharide can scavenge DPPH free radical. To sum up, the volatile oil, water extract, alcohol extract, polysaccharide and ferulic acid of Angelica have a good effect on delaying skin aging.

Acne is a kind of inflammation that occurs in hair follicles, sebaceous glands and their surrounding tissues. It is common in all kinds of people, especially young people. Dong Quai extract has good safety and efficacy as an anti-inflammatory and acne removing material. The results showed that the volatile oil of Dong Quai could significantly inhibit the secretion of human interleukin 1β (IL-1β) induced by propionibacterium acnes in thP-1 cells. However, its therapeutic mechanism remains to be further studied.

Hair cosmetics refer to functional cosmetics that promote hair growth, nurture new hair and prevent hair loss. The essential oil of Dong Quai has a certain effect on promoting hair growth through clinical observation, and the patients did not have any adverse reactions during use. In the meantime, vitamin A contains angelica, vitamin B12, palmitic acid, oleic acid also has soft, smooth, prevents trichomadesis action.

In order to prevent and inhibit the growth of microorganisms and prevent spoilage during transportation and storage, it is necessary to use bacteriostatic/preservatives. At present, most cosmetics use chemical antibacterial preservatives such as hydroxybenzoate, imidazolidyl urea, phenoxyethanol, kaisone, isothiazolinone, etc. Their safety has been questioned, natural chemical antibacterial/preservatives have become a hot spot of cosmetics products. Angelica alcohol is a natural bacteriostatic agent, non-toxic, non-irritating, has a strong inhibitory effect on Escherichia coli, Staphylococcus aureus, Aspergillus Niger, penicillium, the antibacterial effect is even better than chemical bacteriostatic/preservative. In addition, the alcohol extract and ferulic acid contained in Angelica could inhibit malassezia (spherical, pityroid, blunt and axonal Malassezia).

Dong Quai( Female ginseng) is a traditional Chinese medicine for nourishing blood and promoting blood circulation. Its extracts and active ingredients have many functions such as whitening and freckling, moisturizing, sunscreen, delaying skin aging, anti-inflammation and acne, hair breeding, antibacterial and anti-corrosion, etc. It can replace a variety of effective raw materials or be used as auxiliary raw materials in cosmetic applications. It is worth noting that although angelica extract has been widely used in cosmetics, the therapeutic mechanism of part of its efficacy is still not clear, which needs further exploration and exploration.

What Is Artemisinin?
Download Form
[contact-form-7 404 "Not Found"]
Scroll to top