How Silymarin Extract Work For Liver?

You are here: Home1 / Blog2 / blog3 / How Silymarin Extract Work For Liver?

Silybum marianum is a species of silythistle in the Composite family, native to southern Europe and North Africa. Silymarin is a natural active substance extracted from the dried fruits and seeds of milk thistle. The main components are silybin, isosilybin, Silydianin and silychristin. Among them, silybin and isosilybin are corresponding isomers respectively (Shown in the figure below), with the highest silybin content (60% ~ 70%) and the strongest activity. Silymarin extract is light yellow to brownish yellow powder, insoluble in water, chloroform, soluble in methanol, ethanol, ethyl acetate, acetone and other solvents. 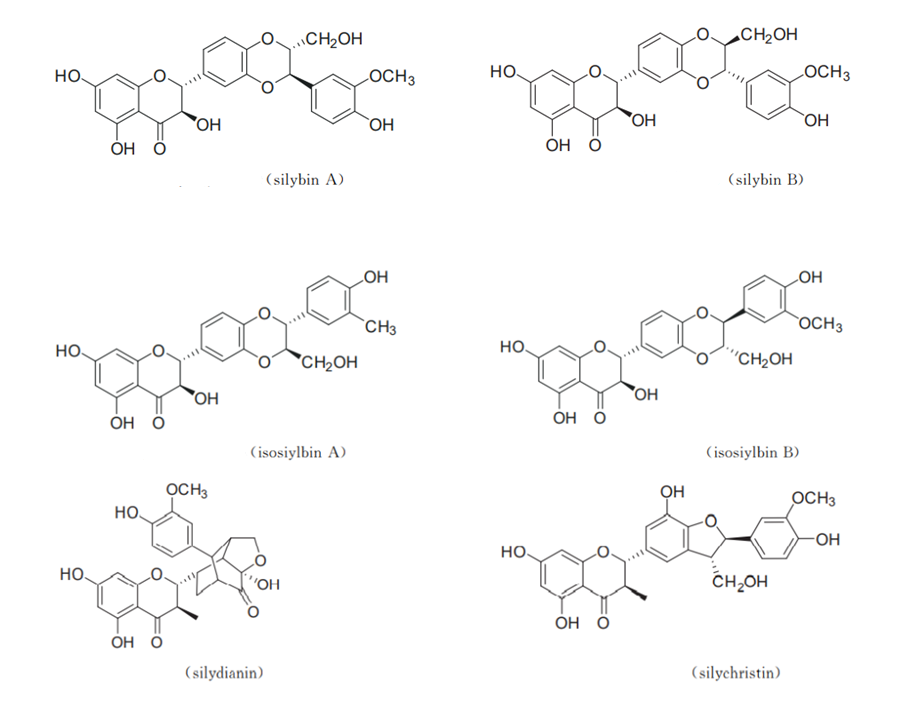 There are many extraction and separation methods of silymarin. The most commonly used method is to mechanically extract silymarin seeds to separate fat (oil) and then heat reflux with methanol, ethanol, acetone, ethyl acetate and other organic solvents. Finally, silymarin extract is obtained through multiple extractions, elution and recrystallization. Silymarin extract has a variety of pharmacological activities, the most fixed attention is its liver protection, it can prevent liver cell degeneration, help detoxify and purify, and still can promote the repair of damaged liver cells. Other silymarin benefits include cardioprotection, neuroprotection, and immune modulation. In addition, it exerts anti-tumor and anti-inflammatory effects in a variety of cell systems. As a natural remedy, silymarin has long been used in traditional Chinese medicine for kidney and spleen problems. It also has antifibrotic effects in chronic inflammatory liver disease.

Silymarin extract has been widely used in liver health products and supplements. The effects of silymarin on liver health have yet to be established by controlled studies, and the formulas used for its treatment are not uniformly standardized. However, based on clinical experience, it has been used as a treatment for hepatic disorders, including chronic hepatopathies. It is thought to be useful for the treatment of acute hepatitis and hepatic toxicity, as well. Currently, it is available as a capsule and tablets, in different strength levels. The mechanism may be as follows:

Silymarin is a powerful antioxidant flavonoid. German scientific studies have confirmed that silymarin can inhibit 5-lipoxyenase (an enzyme that accelerates oxidation in the body) and increase the concentration of GSH (antioxidant enzyme) secreted by liver cells and stabilize cell membranes (mainly liver cells). Silymarin can protect the liver mainly by anti-lipid peroxidation and scavenging free radicals and increasing the level of GSH in liver. Siphribin can significantly inhibit the expression of IL-2, IL-4, IFN and TNF in the liver, and can also reduce the levels of alanine aminotransferase and aspartate aminotransferase, and inhibit the apoptosis of liver cells. Animal studies have shown that silymarin and silybin have protective effects on liver injury caused by acute ethanol poisoning, CCl4, cisplatin, thioethoylamine, galactose amine, tert-butylhydrogen peroxide, halothane and paracetamol.

When silymarin binds to liver cells, it enhances the function of liver cells to detoxify and fight against toxic substances, because silymarin itself has a strong antioxidant effect and reduces the concentration of toxic substances that can counteract the invasion of liver cells. POLYAK et al. showed that silymarin can inhibit the replication of HEPATITIS C virus JFH1 in hepatocellular carcinoma cells. At present, silymarin is mainly used for the treatment of amanita poisoning, by preventing the hepatoenteric circulation of α-amanitine, preventing the mycotoxin phalloidine and α amanitine from binding to specific receptors on the liver membrane and playing an anti-toxic role. Silybin can reduce the levels of TC, TG and LDL-C and the activities of ALT and AST in non-alcoholicfattyliver (NAFL) model rats, and improve liver steatosis, similar to the anti-NAFL effect. 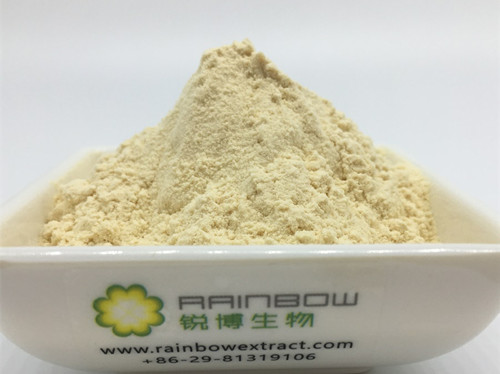 Silymarin extract can promote repair and regeneration of hepatocytes and increase nucleotides protein synthesis in normal hepatocytes. Because liver cells are one of the few organs in the body capable of cell regeneration, injured livers can be repaired, but silymarin does not increase the production of abnormal liver cells such as liver cancer cells. In contrast, silymarin was found to inhibit the proliferation of tumor cells and inhibit the differentiation and growth of cancer cells. Clinical trials of silymarin for liver disease have shown that the drug can improve survival rates in patients suffering from alcoholic cirrhosis. One such trial by Ferenci and colleagues evaluated 420 mg of silymarin per kilogram of body weight and found that patients who received silymarin had higher survival rates than those who did not receive it.

These pharmacological effects of silymarin make it the most natural herb to improve liver function in clinic. Clinical studies in Germany have confirmed that silymarin can indeed reduce the liver toxicity and side effects of prescription drugs such as acetaminophen, butyryl benzene, halothane and dilantin. In practical clinical application, silymarin is the most commonly used supplement product for alcoholic hepatitis, acute hepatitis and liver cirrhosis (fibrosis). Because silybum marianum extract can repair and regenerate liver cells damaged by alcohol. In a 12-month open-label clinical trial, silymarin extract significantly decreased serum levels of insulin-stimulated C-peptide (BCP) and MDA (a marker of liver fibrosis), as well as insulin overproduction. At present, the use of silymarin has been extensively studied for its liver-protective benefits. The benefits of silymarin for liver health are still unclear, but silymarin extract remains a promising treatment for chronic metabolic diseases, including hepatitis.